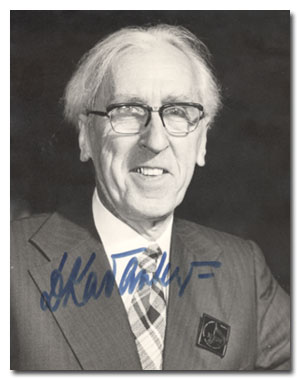 Dmitri Borisovich Kabalevsky’s life spanned the significant and momentous events that have marked twentieth century Russian and Soviet history. He was born in St Petersburg in December 1904 during the reign of the last Romanov Tsar Nicholas II, and died in 1987 at the time when M. S. Gorbachov was making the world aware of two words – perestroika and glasnost – that would again change the course of Russian history.

Kabalevsky’s family moved from St Petersburg to Moscow in 1918 and from this time Moscow became the centre of his work and life. He commenced piano studies at the Skryabin Musical Institute. He then proceeded to the Moscow Conservatoire where he studied piano with Gol’denveyzer, and composition with Katuar and Myaskovsky. He graduated from Myaskovsky’s composition class in 1929 and Gol’denveyzer’s piano class in 1930. In 1932 he was appointed an assistant professor in Composition at the Moscow Conservatoire.

The 1930s and 1940s were Kabalevsky’s most productive period as a composer. During this time he completed three symphonies, three piano sonatas, the operas Colas Breugnon Op. 24 and Sem'ya Tarasa Op. 47, the incidental music to The Comedians Op. 26, as well as numerous other works for piano and many songs.

In 1940 Kabalevsky was admitted as a member of the Communist Party of the Soviet Union. This is one of the most significant landmarks that helped shape the future direction of his political life and to some extent safeguard his musical life. Kabalevsky was associated directly and indirectly with all of the important events, decisions and directions associated with Soviet music. He was associated with the denunciations that followed the Central Committee’s Decree on Music of 1948, and also with the rescinding of the Decree in 1956.

From the 1950s there was a decline in his musical productivity. His political and administrative activities increased markedly, and there was an associated increase in his work and writing concerned with educational development and reform within Russia and the Soviet Union.

The period from the early 1960s is marked by his involvement in revising the music syllabus of the schools of the Russian Federation. Some of Kabalevsky’s major ideas and the thinking behind the syllabus were presented in a set of recorded public music classes entitled What Music Says (1965), and the book A Story of Three Whales and Many Other Things (1970). These provided practical models for teachers to use in their classrooms; they were not based solely on singing or music notation, but instead had listening as the basis for music education.

Throughout his life he was honoured on numerous occasions by the State with awards for his compositions and his contribution to education. In 1972 he was appointed the Honorary President of the International Society of Music Education (ISME), succeeding Zoltán Kodály. He held this position until his death.

In February 1987 Gorbachov invited leaders from around the world in the fields of science and the arts to an international forum entitled “For a Non-Nuclear World, For the Survival of Humanity”. At this conference, concerned with issues that were important themes throughout his life, Kabalevsky suffered a heart attack and died. The funeral service was held in the Main Hall of the Moscow Conservatoire. Kabalevsky is buried in the Novodevichy Cemetery in Moscow. His grave is marked by a marble and bronze monument that was raised by his family and the music teachers of Moscow.